Back up Search
Search
Or

What are you looking for?


It's not called the “land of fire and ice” for nothing. Treating yourself to an Icelandic cruise is about discovering a destination where all nature's charms come together in unison to enthral and amaze. Vast glaciers, vertiginous fjords, impressive geysers and thermal resorts with great facilities make up Iceland's unique mosaic of natural features conducive to complete relaxation.

All about cruises Iceland

Iceland Voyage: Land of Fire and Ice – with Smithsonian Journeys

Expedition to the edge of the Ice Sheet

Iceland Voyage: Land of Fire and Ice – with Smithsonian Journeys

Price is per person, based on double occupancy, based on availability, and subject to change at any time. The category of stateroom to which this price applies may no longer be available.

Water, fire, air... The elements seem to come together here in their most stunning state. During your Icelandic cruise, don't miss the most iconic experiences that makes this island one of the most astonishing places in a North that is like a daydream. 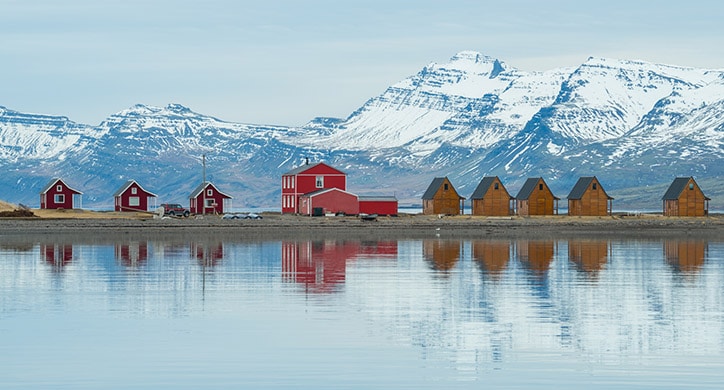 Go on an adventure, yes, but you still need to prepare your trip! Before launching yourself into an exploration of Iceland, here is some essential and fun information on this dream destination.

Iceland, a country of contrasts

Water, fire, air... The elements seem to come together here in their most stunning state. During your Icelandic cruise, don't miss the most iconic experiences that makes this island one of the most astonishing places in a North that is like a daydream. 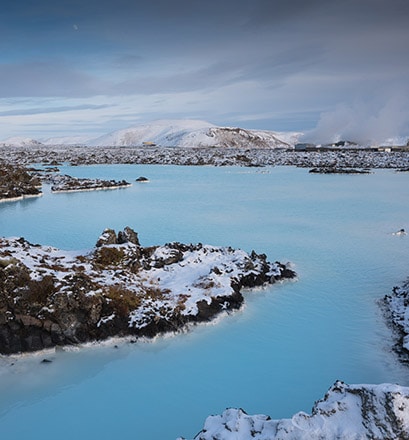 Relax in the warm water baths of the blue Lagoon

This is one of Iceland's most iconic sites. In a country where bathing culture is so widespread, the 39° water of the Blue Lagoon first of all found local success and then international renown. National Geographic has classified it among its 25 wonders of the world. And yet, during its creation at the end of the 1970s alongside the geothermal plant that feeds it, this over air spa was closed to the general public! The public only saw its turquoise colour from 1987. 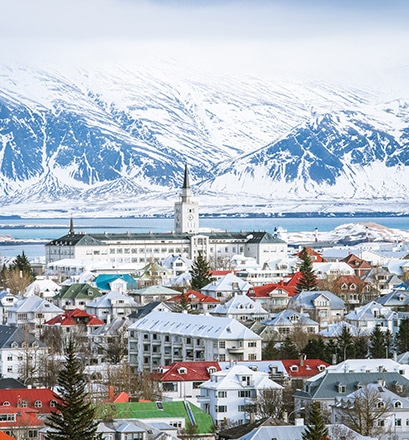 A stroll through Reykjavik

The northernmost capital in the world, Reykjavik only has 200,000 inhabitants, but is set apart by its dynamic energy. Strolling in the streets edged with coloured houses, you'll appreciate the Icelanders' way of life and the local culture, especially with all the shops devoted to design. Among the unmissable sights during a walk in the city, is the Hallgrimskirkja church. Its 73-metre tower provides an unobstructed view over the surrounding area. Tjörnin, Reykjavik's lake, is also a pleasant resting point: around 40 species of birds stop here during the year.

Meet the giant of the seas

This is certainly one of the most magical activities in this country: whale watching in Iceland. During a stop at Grundarfjördur, on the west of the island, a visit to the coast on the Snæfellsnes peninsula is essential. Humpback whales, sperm whales, killer whales, common minke whales and white-beaked dolphins are among the species present in the Icelandic waters. 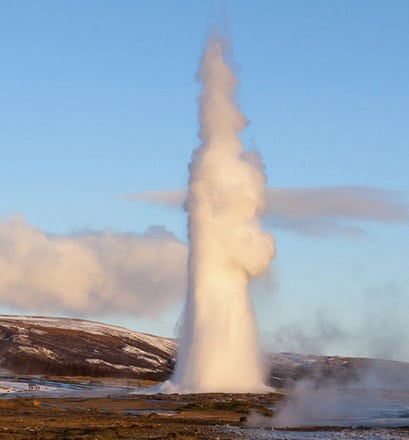 Be amazed by the geysers and waterfalls

Iceland is known for its natural sites. Among them, geysers and waterfalls provide an ongoing show. Among the best known, don't miss Godafoss, one of the most famous waterfalls in Iceland. At 30 metres wide, it is the symbol of the conversion of the country to Christianity. Another iconic waterfall, Gullfoss is nicknamed “the golden falls” due to its sparkling colours, produced by the sun, which creates a rainbow in the water splashes. With Geysir, it makes up one of the three sites of the famous “golden circle” tourist circuit. Its immense steam columns of several metres high are as spectacular as they are surprising. 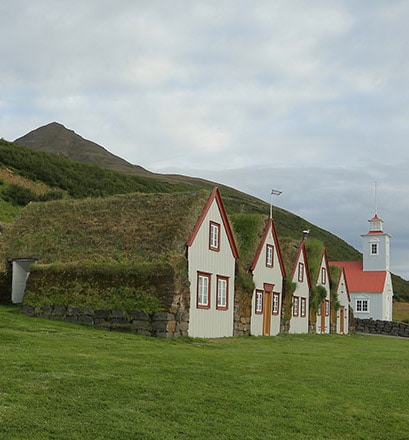 Unique of its type, the Laufás farm is representative of habitations made from peat and wood. The rooves are covered in grass and give the impression that they are buried. Built in 1865, this farm used to house 20-30 inhabitants. Today, transformed into a museum, it highlights Icelandic rural life in the 19th century and presents costumes, local craft objects, tools and utensils used formerly for fishing and agriculture.

Hike in a fjord

On the north-east coast of Iceland, Seydisfjordur is a charming village with around 700 inhabitants. Although it's a pleasure to stroll in the main street leading to the picturesque Scandinavian church, people come here especially for the fjord, which is described by many as the most beautiful in the country. At 17km long and with an average width of 1km, Seydisfjordur fjord is lined with a mountainous coastline with peaks of more than 1,000m high! Various waterfalls plummet these abrupt slopes to feed the water of the fjords. The different viewing points allow you to access staggering panoramas.

Watch the birds on Heimaey Island

Several kilometres to the south of the country, Heimaey Island is a paradise for ornithologists. From a boat, it is possible to admire millions of birds, including 6-8 million puffins, the largest colony in the world. Northern Gannets and Guillemots also nest in the cliffs of the island. In the water, Killer Whales, dolphins and porpoises will give you some great surprises! 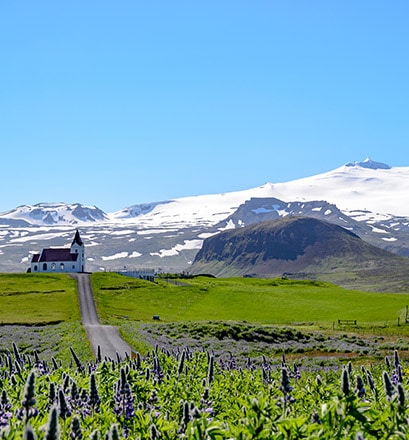 Iceland owes its nickname of “land of fire and ice” to its various volcanoes. Among them, Snæfellsjökull, aged 700,000 years, is one of the most famous. Its snowy summit is visible for kilometres around, the surrounding plains are a striking green in the summer and the nearby sea makes a complete 360° landscape. The volcano acquired international fame when, in 1864, Jules Verne chose its crater as the entrance point for his famous novel, Journey to the Centre of the Earth.

Go on an adventure, yes, but you still need to prepare your trip! Before launching yourself into an exploration of Iceland, here is some essential and fun information on this dream destination.

It is normal to take your shoes off when you go home or into someone's house... But also, in some shops and public places.

Crime is almost non-existant in Iceland. In all its history, the police have only used arms once... In 2013.

Kjötzupz is a typical Icelandic recipe. It is a bouillon in which lamb, onion, white cabbage, carrots, white beans, rolled oats and rice are cooked. A hearty dish to help you face the sometimes extreme temperatures!

According to a 2007 survey, 62% of Icelanders believe that elves exist. A collective to defend these little creatures ensure that projects such as the construction of motorways or other infrastructures of all kinds do not extend into their territory.

Icelandic researchers have developed a process to change the CO2 that is responsible for global warming into rocks. Once absorped, the carbon dioxide is dissolved in the water before being injected into the rock, where it solidifies. This mineralisation takes two years, whereas in nature it takes thousands of years for the CO2 to take the form of crystals. A major advancement in the fight against polluting emissions.

Recommended reading. Taking up the tradition of the Icelandic sagas, Fish have no Feet by Jon Kalman Stefansson, creates the portrait of three generations of one family. A raw portrait of this unique land, tracing the grand-parents of Ari, the novel's protagonist, originally from the modest fishing village Norðfjörður, to their children, over the course of a century.

Music. Less well-known than her compatriot, Bjork, Emilíana Torrini is part of the Icelandic contemporary music scene. It is due to her third album, Love in the Time of Science that she became internationally known. Her rythmic pop and acoustic style attracts various artists who she collaborates with, including Sting. Several of her songs have been used in big label advertisements and in film tracks, such as Lord of the Rings: Two Towers.

Film. Rams, by Grímur Hákonarson. In their home land, the plain is white, covered with a fine layer of snow. They breed sheep outside, in the heart of the wild Icelandic landscapes. They are brothers, neighbours and share a love for animals, but Gimmi and Kiddi don't talk anymore. They are even rivals during the farming competitions. Yet, the sheep disease scrapie will change everything for the farmers in the valley, forced to slaughter their livestock.

This is the number of volcanos in Iceland. Such a concentration is due to the position of the island on the Mid-Atlantic ridge between Europe and North America, a zone where the tectonic plates are moving away from each other, creating numerous fracture zones. The interactive site The Catalogue of Icelandic Volcanoes, aims to create a census and communication information about the volcanoes.

Want to find out more about our unique and exceptional destinations?